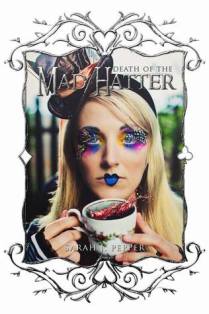 Title: The Death of the Mad Hatter

If the king loses his head, then the Queen with a Bleeding Heart would rule the Red Court until Time ceased to move forward. When a second carried on for infinity, every creature in Wonderland would tip their Hat to the misfit girl with a Boy’s name (or was it a boy with a Girl’s name?) who’d end the Reign of Terror. However, it all hinged on the One-Eyed Hare being able to convince an uninspirable Heir that the impossible was indeed possible—like stopping time—and that Love was worth a Beheading.

In the end, would it matter who Reigned?

I was given a free copy of this book by the author for an honest review.

The Death of the Mad Hatter is quite a journey. It is, as the title suggests, an adaptation of the classic, Alice in Wonderland. Sarah J. Pepper has a wild imagination and her story is disturbing yet fun.

All of the characters are strange but interesting. Alice Mae is truly unique and quite eccentric. Ryley starts out as a pretty normal teenager but, of course, this changes as the story progresses.

The story flows well although it is a bit confusing at times partly because of the language used by the Wonderland characters. I really liked the ending. Sarah J. Pepper has a wonderful sense of humor and (I can’t say it enough) a great imagination.

Death of the Mad Hatter would be a good read for both adults and young adults, especially fans of fantasy or Alice in Wonderland.

Sarah J. Pepper specializes in dark, paranormal romance – think “happily ever after” but with a twisted, dark chocolate center. Real-life romance isn’t only filled with hugs, kisses, unicorns, and rainbows. True-love can be more thoroughly described in times of darkness and tribulation. It’s in those harsh moments where you see what a person is truly capable of – both the good and bad. Sometimes prince-charming isn’t always on time, and the glass slipper is a little snug. However, it doesn’t mean Charming is not Mr. Right, and who says every shoe is the perfect fit?