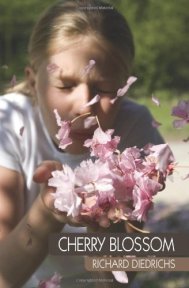 Description: Fifth Grade teacher, Dick Hammer, feels a profound connection with one of his students.  Danilee Kindle is bright, willful, and needy.  “A potent mix.”   The more time he spends with the abandoned girl, and the closer they get, the more scrutiny and disapproval Dick feels from his colleagues, his principal, and his wife.
As a forty-seven-year-old, first-year teacher, Dick staggers at the need he finds behind the gates at Cherry Blossom Elementary. He commits himself to educating, nurturing, and protecting every child.  When a sexual molester and a murderer enter the sphere of the classroom, Dick rushes his star pupil from danger.  He heads toward the border, crossing a line from which he can never return.

It took me a long time to read Cherry Blossom. I read about half of it and then set it aside because I was so frustrated with the main character’s stupidity that I thought maybe I’d feel better about him if I went back to it at another time (sometimes it’s my mood that’s affecting how I feel about a book). In this case I didn’t feel any differently when I went back to it.

Dick Hammer is the worst protagonist I have ever encountered in my reading. I couldn’t feel sorry for him because of thoughts he was having about a 10 year old girl, Danilee. He wasn’t portrayed as a pedophile but I felt uncomfortable reading about his feelings for Danilee and some of the descriptions of her. One that sticks in my mind: “her long slender fingers held her book.” I’m sure descriptions like that were meant by the author to be just that, descriptive, but they rubbed me the wrong way when he was describing a 10 year old.

It wasn’t just Dick’s feelings for Danilee, though, that made him so pathetic. He was dumb enough to let kids making fun of his name bother him. The man was 47 years old. He also let his wife walk all over him and had fantasies of killing her but didn’t have the guts to leave her. And taking Danilee out of town? Really?

Although I didn’t enjoy this book, Richard Diedrichs did bring out strong emotions of dislike in me. If that was his goal, he succeeded. He also made some good points about problems in our education system.