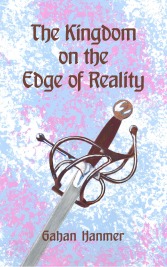 Title: The Kingdom on the Edge of Reality

A Feudal Kingdom That Takes Nothing from the Modern World

Why has Jack Darcey, a stage actor and ex-competitive fencer, been tricked into visiting a medieval kingdom in the Canadian wilderness? How could such a place even exist in the 21st century, and why would anyone choose to live there?

The Kingdom on the Edge of Reality is a thrilling journey into a society and culture which has rejected the modern world. Albert Keane, an old school-mate of Jack’s, has used his great wealth to build a working feudal monarchy which takes nothing from the modern world. But while Jack explores the beautiful and prosperous kingdom, discovering its wonderful people and culture,  evolution begins to grow. Duke Hawke, another face from Jack’s past, is set on taking the kingdom for himself. Jack will have to fight for his life and the future of the valley as total war breaks out in The Kingdom on the Edge of Reality.

The Kingdom on the Edge of Reality is both escapist adventure and penetrating cultural commentary. Gahan Hanmer creates an immersive world and characters that instantly come alive on the page. His vivid, often humorous storytelling transports you to a world of discovery and adventure. But The Kingdom on the Edge of Reality has as its heart a timely question for our age: Do we really need technology to be happy?

The Kingdom on the Edge of Reality is a modern tale but a ridiculously rich man has built  a kingdom in the middle of nowhere in Canada and the kingdom is based on medieval times. I thought this idea was creative and enticing so I was looking forward to reading this book.

Gahan Hanmer’s writing flows well but I found myself doing quite a bit of skipping and not missing anything important.

The main character, Jack, doesn’t make it easy for you to like him. He just lets life happen and doesn’t make his own decisions. Actually, there were few characters in this story that I did find likable.  His friend, Albert, is pretentious. Several women jump into bed with Jack without a second thought.

I found the idea of Kingdom on the Edge of Reality a good concept but I felt that there was something missing; however, I do believe that many readers will like it.

Gahan Hanmer was born into a family of actors and painters. He is an accomplished fencer and stage dueling instructor. Gahan is the nephew of Marlon Brando, He developed his talent exclusively as a theater artist, working with many inspired teachers and directors. He speaks French and Spanish and has a Master of Fine Arts degree from Columbia University. To learn more about Gahan Hanmer, visit http://thekingdomontheedgeofreality.com/thekingdomontheedgeofrealitybooktour.htm.

free copy of The Kingdom on the Edge of Reality

3 thoughts on “Book Review & Giveaway: The Kingdom on the Edge of Reality by Gahan Hanmer”