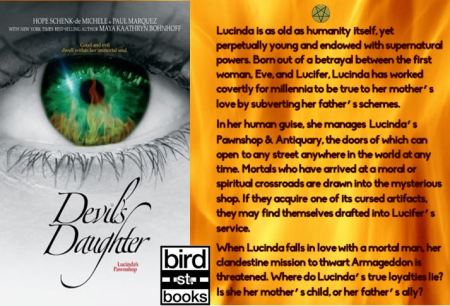 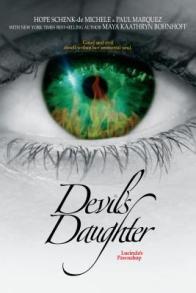 Lucinda is as old as humanity itself, yet perpetually young, beautiful, and endowed with supernatural powers. She lives a double life human and immortal. In her human guise, she manages Lucinda s Pawnshop & Antiquary, the doors of which can open to any street anywhere in the world at any time. Mortals who have arrived at a moral or spiritual crossroads are drawn into the mysterious shop. If they acquire one of its cursed artifacts, they may find themselves drafted into Lucifer s service. Born out of a betrayal of trust between the first woman, Eve, and father Lucifer, Lucinda has worked covertly and subtly for millennia to be true to her mother s love by subverting her father s schemes. She wins freedom for some; Lucifer keeps those who fail for eternity. She has to be careful, for Lucifer has placed her under the watchful eye of the fallen angel Nathaniel, whose real intentions are a mystery. Lucifer manipulates his army of corrupted souls to achieve his end game: to explode the tension between global powers, then create a charismatic anti-Christ to seemingly save the world with Lucinda as mother and a hand-picked human as father. But Lucinda has her own plans. After centuries of seeming distance from humanity, she falls in love with a mortal man, which threatens to derail Lucifer s plans to trigger Armageddon. This book follows Lucinda s torturous relationship with her supernatural father, as she strives to secretly undermine his crusade to destroy mankind. How deep does Lucinda’s humanity go? Where do her true loyalties lie? Is she her father s ally, or her mother s child? And if the Devil’s daughter will not love a man he can control, can Lucifer control the man she loves?

I received a free ecopy of this book for an honest review.
x
Devil’s Daughter is about Lucinda, the daughter of Satan and Eve, so she is half human and half angel. She is surrounded by demons, fallen angels, and others who serve her father.
x
The authors’ writing flows well and is easy to follow. The book did get a little too in depth for my taste at times so I did do some skipping that didn’t affect the story. I especially liked the side stories about people who purchase items in Lucinda’s Pawnshop. These items are talismans infused with evil and can cause people to do horrible things. Some people are easily swayed to perform these horrible acts while others, thankfully, are strong enough to stick to their morals.
x
Many of the characters around Lucinda are, of course, pure evil. Lucinda is a complex being who finally finds her human side when she meets Dominic, and they fall in love. He is not perfect but he does try to be a good Christian and he seems to be just what she needs. Lucinda believes that, as the Devil’s Daughter, God won’t listen to her but I wonder if Dominic was sent to her by God…
x
If you like supernatural stories that include God and the devil as well as some current issues such as unrest in the Middle East and religious cults, then you’ll definitely like The Devil’s Daughter.
x
x

producing partners for more than four decades. They both grew up in Los Angeles, California and share a passion for mystery and science fiction. This passion lead them to create the forever young and beautiful daughter of darkness, Lucinda. To assist in bringing Lucinda’s story into the literary world, they enlisted the help of New York Times best-selling science fiction and fantasy author Maya Kaathryn Bohnhoff. Maya is the author of more than a dozen novels, and the co-author of The Last Jedi: Star Wars (Star Wars: Coruscant Nights – Legends). All three reside in California. 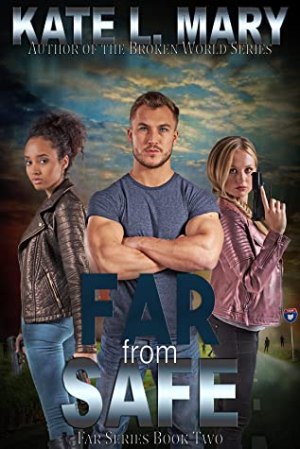 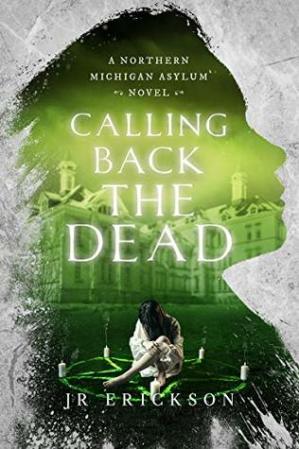 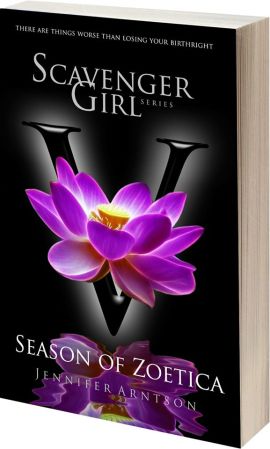