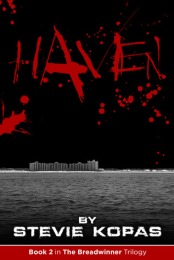 The end of the world is not glamorous. The survivors of The Breadwinner have barely escaped the clutches of the undead and are headed into the unknown, continuing their never ending search for solace in the post-apocalyptic landscape they were suddenly thrust into. The city of Haven, once a paradise for the living, but now crawling with the flesh hungry creatures they try so hard to elude, could be their only chance. Resume your post-apocalyptic survival adventure with Veronica, Samson and Ben as they struggle with hope and loss, and as they battle the futility of existence. Take on a new experience as you find yourself once more at the beginning, thrown into the depths of the end of the world with new survivors. Join Michelle and Lulu, ordinary women faced with extraordinary obstacles on their devastating journey and the pursuit of sanctuary in a world collapsed.

Haven continues the story of The Breadwinner with the addition of new territory, new characters, and new complications. The second book in The Breadwinner Trilogy will leave you stunned and bloodthirsty for the conclusion of the series. Who you once were still does not determine who you will become in the face of catastrophe, especially in Haven.

I listened to The Breadwinner, the first book in this series, and was looking forward to listening to the next book, Haven. I wasn’t disappointed.

The same characters are in the beginning of Haven. They had survived the apocalypse in The Breadwinner and are now on a boat not sure where they’re headed until they reach Haven. They meet Gary and he seems to have the perfect set up so they decide to stay.

All of a sudden, Part 2 came along and there were brand new characters and it was the beginning of the apocalypse all over again. I didn’t think I was going to like going back but for this story, it worked well.

I didn’t care for Michelle or Lulu, the main characters in Part 2. Lulu was sweet, but a doormat. I knew Michelle was a bitch from the first time she opened her mouth. Once the apocalypse hit, she proved to have the skills to keep her and Lulu alive but she lacked social skills.

I haven’t decided if I like the ending of Haven or not. I don’t believe in spoilers so I’ll just leave it at that.

I definitely recommend Haven and I’m looking forward to the third book in the trilogy. I have to find out how it ends!!

Stevie Kopas was born and raised in Perth Amboy, New Jersey. She is a gamer, a writer and an apocalypse enthusiast. Stevie will never turn down a good cup of coffee and might even be a bit of a caffeine addict.

Kopas also participates in the At Hell’s Gates horror anthologies and all profits are donated to the Intrepid Fallen Heroes Fund. Her short stories, Nefarious and Patient 63 can be found in the first two volumes of At Hell’s Gates.

She currently resides in Panama City Beach, Florida and tries to spend as much time as she can in the sun.

Stevie is also the Managing Editor of the website Horror Metal Sounds and a writer for the site. She is an avid reader of horror and post-apocalyptic fiction (especially zom-poc) and reviews for The Bookie Monster. Offline, Stevie is a telecommunications professional.

Stevie’s official website can be found by visiting http://someonereadthis.com and you can connect with Stevie on Facebook at http://facebook.com/thebreadwinnertri…