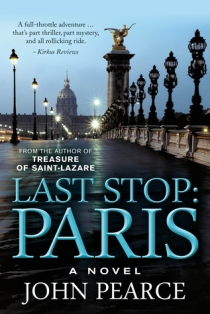 Eddie Grant, half American and half French, has been trying for years to find and punish the evil mastermind who murdered his wife, his son and his father. He has all but given up when a mysterious murder thrusts the case back into the foreground, and he seizes the opportunity with gusto – but with the certain knowledge that his decision brings great danger to the ones he loves. Like its predecessor, it is a novel of Paris, Eddie’s home.

Last Stop: Paris is an action/mystery/suspense novel that kept my interest throughout. It’s the second book in the series but it does stand on its own. Enough is mentioned about the first book that I hope to have time to go back and read it, but I didn’t feel like I was lost in this book without having read it.

The characters are well developed and believable. Eddie and Aurelie are a power couple who find themselves embroiled in danger as they try to solve this mystery.

The author’s writing style flows well and the descriptions of Paris are very good. I recommend Last Stop: Paris to anyone who enjoys thrillers and mysteries.

John Pearce is a part-time Parisian but lives quite happily most of the the year in Sarasota, FL. He worked as a journalist in Washington and Europe, where he covered economics for the International Herald Tribune and edited a business magazine. After a business career in Sarasota, he spends his days working on his future books – a sequel he expects to publish later in 2014 and a prequel after that. For several months each year, he and his wife Jan live in Paris, walk its streets, and chase down interesting settings for future books and his blog, JohnPearceAuthor.com. They lived earlier in Frankfurt, Germany, which gave him valuable insights for several of the scenes in his sequel, whose working title is Last Stop: Paris.