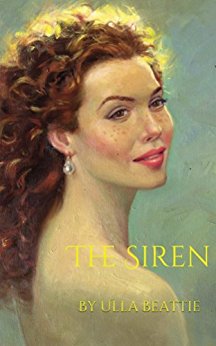 Young Norma marries a rich older man but the union is shattered by his premature death. A recurring theme of disaster comes through her second husband’s jealous younger brother who will stop at nothing to protect his own inheritance.
Further difficulties come through her third marriage where her husband leaves her to enter into another, bigamous marriage. After his death, his bigamously married wife is left penniless. Her brother wants to find the woman who deprived his sister of her pension. In the process, he becomes fascinated by the Siren who has outlived all her husbands.

I received a free copy of this book and was not compensated for my review.

The Siren is the story of the life of Norma who is a cobbler’s daughter. She and her widowed mother are barely able to make ends meet by running a haberdashery. Because of this, Norma’s mother can’t wait for her to marry a man who can take care of them. The problem is that Norma wants to marry a man she loves, not for money or status.

Norma does find love with a man who is much older than her. They are very happy and this would be her happily ever after, but he unexpectedly dies. Norma’s next two marriages are mistakes, but Norma eventually learns from her mistakes.

Norma’s character is complex. She is independent from the beginning but, as she gets older, she continues to learn and grow. Her interactions with men are intriguing and, as smart as she is, it takes her a long time to figure out that a marriage must have both love and passion to work.

I recommend this book to anyone who enjoys historical romance or historical fiction.

Ulla Marita Beattie was born in Helsinki, Finland in 1945, which explains why many of her stories have a Nordic flavour.

She has travelled widely and has lived in Austria, Russia, Cyprus, Belgium and Switzerland.Since 1997 she has been based in London, with frequent visits to France.

She is married and has two daughters, now grown up. She has had a lifelong interest in children’s stories, particularly those read to her own and other people’s children.

You can read more about Ulla and her books at http://www.ullabeattie.co.uk.