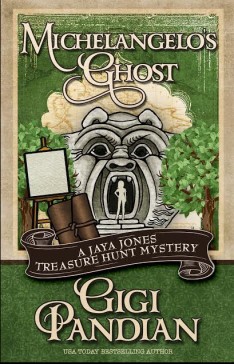 A lost work of art linking India to the Italian Renaissance. A killer hiding behind a centuries-old ghost story. And a hidden treasure in Italy’s macabre sculpture garden known as the Park of Monsters… Can treasure-hunting historian Jaya Jones unmask a killer ghost?

Filled with the unexpected twists, vivid historical details, and cross-cultural connections Pandian is known for, Michelangelo’s Ghost is the most fast-paced and spellbinding Jaya Jones novel to date.

When Jaya’s old professor dies under eerie circumstances shortly after discovering manuscripts that point to a treasure in Italy’s Park of Monsters, Jaya and her brother pick up the trail. From San Francisco to the heart of Italy, Jaya is haunted by a ghost story inexorably linked to the masterpieces of a long-dead artist and the deeds of a modern-day murderer. Untrustworthy colleagues, disappearing boyfriends, and old enemies—who can Jaya trust when the ghost wails?

I received a free ecopy of this book from the author.

This is the fourth book in the Jaya Jones mysteries but the first one that I’ve read. This book definitely stands on its own.

Michelangelo’s Ghost is full of mystery and history. It has detailed history about the Renaissance period in Italy. Jaya’s ex-advisor has a theory that Michelangelo may have had a cousin who was an artist who went to India because he was the black sheep of the family. Because the professor is in ill health, she wants Jaya to check it out for her.

I like the characters in Michelangelo’s Ghost. They each have their own idiosyncrasies that are well defined. Jaya, for example, is a history professor who, like it or not, is hooked on looking for treasures. Her boyfriend, Lane, is an ex-thief who has changed his ways but is still on the run. Those are just a couple examples of the interesting characters in this book.

Michelangelo’s Ghost is full of twists and is definitely recommended for anyone who likes mysteries that include some historical facts.

USA Today bestselling author Gigi Pandian is the child of cultural anthropologists from New Mexico and the southern tip of India. She spent her childhood being dragged around the world, and now lives in the San Francisco Bay Area. Gigi writes the Jaya Jones Treasure Hunt mysteries, the Accidental Alchemist mysteries, and locked-room mystery short stories. Gigi’s debut novel, Artifact, was awarded a Malice Domestic Grant and named a “Best of 2012” debut by Suspense Magazine. Her fiction has been awarded the Lefty Award and short-listed for Macavity and Agatha Awards. Sign up for her email newsletter at www.gigipandian.com/newsletter.

One grand prize winner will receive:

– Signed copies of the first 3 books in the series

– 6 book-themed recipe cards from the locations where each book is set (Italy, Scotland, India, France, and the US)