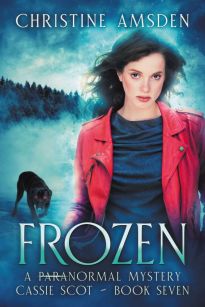 Apparently, life doesn’t end when you get married.

When a couple freezes to death on a fifty degree day, Cassie is called in to investigate. The couple ran a daycare out of their home, making preschoolers the key witnesses and even the prime suspects.

Two of those preschoolers are Cassie’s youngest siblings, suggesting conditions at home are worse than she feared. As Cassie struggles to care for her family, she must face the truth about her mother’s slide into depression, which seems to be taking the entire town with it.

Then Cassie, too, is attacked by the supernatural cold. She has to think fast to survive, and her actions cause a rift between her and her husband.

No, life doesn’t end after marriage. All hell can break loose at any time.

I have read the complete Cassie Scot series by Christine Amsden and was sorry to see it end, so I was thrilled when I learned that she decided to continue writing about Eagle Rock. First, she wrote about Cassie’s best friends Madison and Kaitlin. And now Cassie is back!

Christine Amsden’s writing style flows well and is easy to read. There are a lot of characters in Frozen but they’re easy to keep track of since I’ve read about them and because they’re all unique.

Cassie is married to Evan and they have a one-year-old who is already powerful. They’re very much in love but they have a lot on their plates. People are dying by being frozen to death, Cassie’s siblings are in trouble, there are hell hound sightings for the first time in 500 years, and Cassie is having weird dreams. There’s a lot going on in Eagle Rock.

Cassie and Evan are both stubborn and there were times I wished I could tell them both, especially Cassie, to grow up! Her pride gets in her way sometimes.

I have grown fond of the characters and the town of Eagle Rock and I’m looking forward to reading more Cassie Scot books. I definitely recommend Frozen but I suggest reading the books in order to get the most out of the books.

Cassie Scot was supposed to be a four-book series. Each book centered on a self-contained mystery, while the series dealt with some character growth and struggles. I wrote those four books together, even though they were released a few months apart, so that I had at least a solid rough draft of Stolen Dreams (book four) done before the original Cassie Scot went public.

It was an ideal way to write a series. I had a plan, changed the plan a dozen times, and rewrote to accommodate my new plans.

Then Cassie’s two best friends, Kaitlin and Madison, decided they needed stories of their own. I accommodated them, but it wasn’t as easy. The first four books were now set in stone, the rules of the world fixed, meaning that I had a silent partner in my new books: Younger me!

These days, I’m working on other projects, but Cassie still won’t stay quiet. Before I sat down tow rite Frozen, she kept saying, “Hello? Are you there? I’m not dead. I just got married. Not the same thing.”

It’s great that my character is still talking to me. This makes writing new books in her series easy. The hard part, once again, is that silent writing partner of mine. I no longer have the freedom to go back to book one and make little changes to pave the way for new elements I’d like to introduce. For better or for worse, my world is my world. I now find myself taking something of a leap of faith with each new volume I write, armed with only a few vague ideas of what might happen next.

Frozen is once again self-contained, but it definitely sets up the promise of new adventures to come. Maybe even new, deeper explorations of the world around Cassie. I knew some of this all along, but I’m making up a lot as I go along. I trust my future self can handle it. I also trust she’s going to read this and have some choice words for me when she does. 🙂

Honestly, writing a series is fun. It gives me the chance to go deeper into characters and world than any single book can. It also gives me the chance to revisit favorite characters, and it keeps me from having to reinvent a world from the ground up with each new volume. I like reading series too, and for the same reason. I get invested. I can’t wait to read more about Harry Dresden, Charlie Davidson, Mackayla Lane, Katherine “Kitty” Kat Martini, and others. I hope readers feel the same way about Cassie Scot.

Christine Amsden has been writing fantasy and science fiction for as long as she can remember. She loves to write and it is her dream that others will be inspired by this love and by her stories. Speculative fiction is fun, magical, and imaginative but great speculative fiction is about real people defining themselves through extraordinary situations. Christine writes primarily about people and relationships, and it is in this way that she strives to make science fiction and fantasy meaningful for everyone.

At the age of 16, Christine was diagnosed with Stargardt’s Disease, which scars the retina and causes a loss of central vision. She is now legally blind, but has not let this slow her down or get in the way of her dreams.

Christine currently lives in the Kansas City area with her husband, Austin, who has been her biggest fan and the key to her success. In addition to being a writer, she’s a mom and freelance editor.