Our young god has a new assignment.

The planet Flo is supposed to produce a florescent dust for the gods, but they have closed their mining operation. Bernie’s job is to get the mines reopened and working again. But there’s a problem. Every time he tries to re-negotiate a trading arrangement with the owner of the mines, it fails. But that’s just the beginning of the problems.

Each time Bernie returns to the planet, he finds things have changed. How can he get the mining operation restarted if the mine owner has difficulty remembering Bernie? And, to make it more difficult, other things are changing, too. The technology on the planet is advancing at an alarming rate. It’s as if someone is changing the past.

Bernie’s boss thinks the best solution is to eliminate all the people and repopulate the planet with a species less inclined to develop new technology. Bernie, of course, doesn’t want that to happen.

But how can he get the mines reopened if things keep changing? Bernie must begin a search throughout time for the malevolent force determined to destroy Flo’s timeline. If he can’t find and stop it, everyone on Flo will be destroyed.

I chose to read this book after receiving a free advanced review copy from the author. All opinions in this review are my own and completely unbiased. I have read the other books in this series, and I’ve been patiently waiting for this book to be ready.

I love the world that Steve LeBel has created in which gods create universes. They live on a plateau and they don’t have a lot of resources so they make the universes to trade for the things they need. For example, the planet Flo has been mining fluorescent dust that keeps the gods’ streets glowing at night. They have a trade agreement with the owner of the planet but suddenly they stop mining the dust. Flo is brought in for Bernie to find out why they’re no longer mining and to fix it. If he doesn’t get it fixed soon, everything on the planet will be wiped out and they’ll start all over again. Bernie doesn’t want this to happen, especially once he’s met some of the people.

The characters are well developed and have mostly human characteristics. Bernie, the main character, is a young god, famous because of winning an award for a universe he created. His best friends are Suzie and Lenny and they try to help him figure out ways to save Flo. They also accompany Bernie to the Blue Mountain which is a long ways away from the plateau they live on and the journey could be very dangerous.

I like Steve LeBel’s writing style. He brings the characters and the planets alive. This book does stand on its own but I recommend reading the series. It’s well worth your time. The only complaint I have is that I have to wait for the next book. 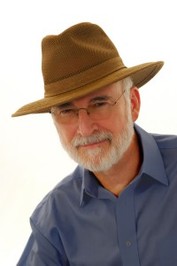 What is the best way to describe an author who writes humorous fantasy?

Do we tell about bookshelves full of fantasy, science fiction, and paranormal books, his love of mythology, or the years he spent as dungeon master? Or is it more important to know his favorite player-character was a chaotic-good elven fighter / magic user? What about that stack of old comic books he never seems to get rid of?

But there’s a serious side too. The other half of his bookshelf is filled with books on management, marketing, computer programming, and financial analysis? What about his years as a hospital president, or the many businesses he created, his years as a stock trader? What about his early years counseling drug addicts?

Is there a pattern to his travels around the world? Why chose places like King Arthur’s Camelot, the Temple of Delphi, Buddha’s Tree of Enlightenment, China’s Forbidden City, or the Great Pyramid of Egypt? What is it he’s searching for?

And what does any of this have to do with writing a good fantasy book?

Perhaps it’s that mix within Steve that makes The Universe Builders such a delightful story with such serious undertones.