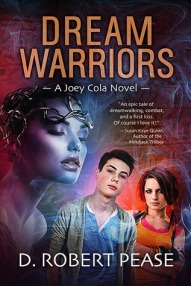 Joseph Colafranceschi is a fifteen-year-old, self-described geek, living in the Bronx. The second youngest of twelve sons of the former U.S. ambassador to Italy, Joey discovers that a small Egyptian statuette, given to him by his father, endows him with power to control his dreams.

After his brothers throw him down a manhole, Joey is drawn into a hidden society of warriors who have been battling a reincarnated Egyptian Pharaoh for over 3,000 years. In the dream world, everyone is not what they appear to be, and it’s impossible to tell who to trust. As Joey slips deeper into a world of gladiator battles and clandestine missions within other people’s dreams, he catches the eye of a beautiful Egyptian princess.

The only thing that keeps him grounded in reality is his best friend Alex, but even she may not be who he thought she was.

Dream Warriors is a young adult fantasy with a lot of twists. It’s a little slow getting started but it’s worth it to stick with it. There ends being a lot of action and excitement throughout the rest of the book.

The main characters, Joey and Alex, are brainiacs and, therefore, outcasts in school. They are best friends getting ready to graduate from high school. I liked both of them and they are both mature for their ages, except when it comes to Joey and girls. The many other characters are described well and they all have their cute and/or interesting quirks.

D. Robert Pease has a good writing style that makes it easy to follow where the characters are, which is important in this book.  One thing that frustrated me is that this is one of those books that just stops with many issues left unresolved. I will definitely be reading the next book because I HAVE to find out what happens.

I definitely recommend Dream Warriors to both adults and young adults although I’d wait to read it until the next book is out. Or plan on reading book 1 again right before book 2 comes out.

D. Robert Pease has been interested in creating worlds since childhood. From building in the sandbox behind his house, to drawing fantastical worlds with paper and pencil, there has hardly been a time he hasn’t been off on some adventure in his mind, to the dismay of parents and teachers alike. Also, since the moment he could read, books have consumed vast swaths of his life. From The Mouse and the Motorcycle, to The Lord of the Rings, worlds just beyond reality have called to him like Homer’s Sirens. It’s not surprising then he chose to write stories of his own. Each filled with worlds just beyond reach, but close enough we can all catch a glimpse of ourselves in the characters he creates.

D. Robert lives in the gray-skied world of Northeast Ohio with his wife, two kids (a boy and a girl) and two pets (a dog and a cat) and a pond full of goldfish. When not writing he loves to travel the U.S. via RV with his trusty Jeep in tow, or ride the hills of Ohio on his bike..