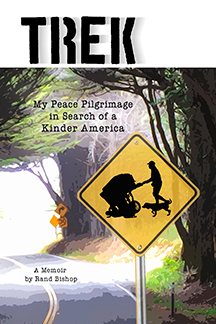 2017, America was turning mean. Heartsick, Rand Bishop couldn’t sit idly by. His action plan, however, had friends and family questioning his sanity. At 67, on bad knees and arthritic feet, with minimal camping experience and zero knowledge of long distance hiking, Rand set out to walk 900-miles, from Southern California to the Central Oregon Coast.

How an aging pilgrim managed to survive a 90-day test of will and endurance is only a fraction of this inspiring tale. The newfound hope Rand gained by listening to and interacting with a thousand people from nearly every walk of life is the true heartbeat of the TREK story.

Guest Review by Sal A.

Some books take you on a journey. Sometimes, you start reading in your comfy chair with the daylight streaming in around you and the fire burning in the woodstove and before you know it, you look up again and it’s pitch black outside and the fire has completely gone out. With some books it’s just like that.

Rand Bishop’s ‘Trek’ took me on a journey. And this time it was literal.
Two years ago, Rand Bishop noticed a problem. He wasn’t sleeping very well. He decided that the reason was the discontent and anguish that he was feeling about the current political situation in the United States. This was shortly after the 2016 election, when bigotry, racism and sexism (among other ‘isms’) seemed to suddenly come roaring back to life in full force. Bishop refers to this as a “culture of meanness” and it’s something that he felt was rising up and smothering all American people.

The only problem was, he wasn’t sure what to do about it.  Bishop was no politician. He was (and is) a regular guy with a love of playing guitar and a dog named Millie. So, he decided that he would protest peacefully in the form of a walk. Bishop’s ‘Trek’ took place during the summer of 2017 and went all the way up Highway 101 from Southern California to Oregon. All told, this route goes for about 1,500 miles along the coast, but Bishop was not deterred by the length of the journey. He was determined to make some sort of difference in the way he knew how.

Along the route, Bishop met with many interesting people and heard their stories. The book is filled with that charm and charisma that make up Americana in its purest form.  I can’t recommend this highly enough and I think you’ll find it just as enlightening as I did.  I give it a solid 5 out of 5 stars.

“I love this book. I laughed, I cried, I walked down memory lane. I drove a big truck for 12 years, many by myself. I know those roads and my feet hurt just reading about this journey. Thank you, Rand, for sharing your story.”-Nancy B. Thompson, Amazon

“The author’s musings on this once in a lifetime adventure make the reader feel as if she is on the trail alongside, experiencing all the emotional highs and lows without getting blisters on her feet. I loved every word; every page; every chapter! TREK is a delightful a book ~ I didn’t want it to end!”-Robyn Taylor-Drake, Amazon

“I loved turning to TREK when I couldn’t take the news any longer. It was like I was able to follow along in my worn down tennies — go at the pilgrim’s pace, meet the people he was meeting, see what he was looking at, while feeling the swoosh of trucks zooming by way too close and way too fast. More than a trek, this is a journey of discovery!”-Randall Platt, Amazon 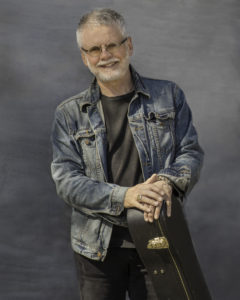 Oregon native Rand Bishop is a Grammy-nominated songwriter, platinum music producer, musician/singer, author, and lifelong activist for peace, justice, and equality. In his 45 years as a music-business professional, Rand recorded for major labels, shared stages and harmonized with legends, contributed compositions to more than a dozen feature-film and TV soundtracks, several stage musicals, and amassed more than 300 tunesmithing credits.

Rand has authored five published books, is an optioned, award-winning screenwriter, a produced playwright, and, for six years, penned a bi-monthly column for American Songwriter Magazine. He has served on the boards of directors of three non-profits and currently acts as music director for the Central Oregon Coast Unitarian Universalist Fellowship. In June, 2019, Rand premiered his original, one-man, musical, stage performance, TREK on Stage.

END_OF_DOCUMENT_TOKEN_TO_BE_REPLACED

“Man up,” he told himself. “Man up.” It was what his father always told him, and there was nothing more that he wanted than to be a man. So he took a deep breath, filling his nose with the scents of baseball and looked up to the sky, squinting a little.
It was a plane, not far from the blimp he noticed earlier; that was all. Nothing to be afraid of. A tiny sigh of relief escaped his lips as he saw the familiar shape outlined over his head, wings spread out against the sky.
It was the last thing he saw before the explosion ripped his small body apart with the force of a hundred suns. The quiet of thousands of lives extinguished in the blink of a second took over, disturbed only by falling rubble. The sun beat down again, hot and sticky, on what remained of Tom, his father, and all the others who had been unfortunate enough to be at Wrigley Field for the biggest game of the season.”
—
Late in the 21st century, the United Continental States of America is running smoothly. Unemployment has been eradicated, terrorism is no more, and any internal dissent diminishes by the day. Most give credit to President Meyers, and many can no longer remember the last election, but it is a small price to pay to keep the country safe from the terrorist group Hariq Jihad.
Things aren’t as they seem, however, as Gunnery Sergeant Anthony Jackson is conscripted into the personal security detail of President Meyers. While the only thing he places above his country is his family, he begins to feel that not everyone is content with how things are. Even more, he begins to fear for his oldest daughter’s life as she begins to question the eroding personal freedoms and democratic rights. Considering that entire families have disappeared over the slightest infraction, one cannot be too careful.
Torn between liberty and safety, family and country, can Jackson balance his loyalties, or will he be lead to an explosive collision with the system he has dedicated his life to serving? In this explosive and highly acclaimed dystopian political thriller novel, the world you live in will never look the same again!
Amazon

Anthony Jackson, military veteran, member of the Presidential security team, father, husband, patriot and spy. His daughter safely recovered from a government detention centre, Jackson’s role as a spy for the anti-government Apocolyte group is firmly cemented. All he needs to do is keep his head down, do his job, and get intel back to his rebel handler. But as Jackson’s suspicions about President Meyers are proven true, and the tasks he’s asked to handle become more and more immoral, his loyalties are becoming strained.

Where is the line between truth and lie? Between loyal citizen and blind follower? Between right and wrong? And who gets to draw that line? The Apocolytes are growing stronger, but Meyers is too, and only one of them can be the bad guy. But which? Jackson needs to choose sides, and he needs to do it fast. But in the end, only the biggest tragedy of them all can force his hand.
His life will never be the same, his family will never survive, and his ideals can be shattered or overturned. Assassinations are all part of the job, he’s always dealt in lies and secrets. But now there’s something much more personal on the line: vengeance. Saving the world from terrorists is no big deal, knowing who the terrorists are is the real trick.
Amazon

Anthony Jackson. Patriot. Spy. Widower. Still reeling after the death of his wife, Jackson is numbly training anti-government troops. Confident that his role in political affairs has dwindled to being a glorified shooting teacher, Jackson is slowly trying to piece his heart back together. Until the call comes. The rebels are far from done with Jackson, and this time the promised reward is big and juicy: the Presidency.
As the world slowly falls apart, men fight and men die, and Anthony Jackson cannot simply watch. Something has to change, and someone has to change things, and deep down, Jackson knows that he’s the only man that can do the job. But as cities fall, the eternal question continues to burn in his mind: just who can he really trust?
In a world of lies and secrets, where even the ones you love can betray you, Jackson must find right and justice. Only then can he lead the country that he loves. If he survives that long.

I chose to read this trilogy after receiving a free e-copy. All opinions in this review are my own and completely unbiased.

As I read Fire War, I was beginning to regret agreeing to read the entire trilogy. There was so much explaining and little action that it took me a long time to get through the first half of the book. I kept setting it aside to read something else. Once I got to the end of Fire War, however, everything changed. I read the end of the first book through the end of the third book in one day. It was so good!

Anthony Jackson is the main character and he loves his country. He’s a military man and the only thing he loves more than his country is his family. The country seems to be in better shape than it ever has and it’s secure because of President Meyers who has stopped all travel in and out of the country. Jackson notices some things that Meyers does that are questionable but writes them off as Meyers knowing what’s best for the country. Eventually, however, it’s all too clear that things aren’t as they seem and that Jackson is working for the government but this government no longer represents the country that he loves so well. I kept wondering how long it would take Jackson to realize this. He’s so loyal that it takes him a while.

By Fire War III, Jackson is no longer working for the government but leading an anti-government group. They don’t want war, they just want to return the country to a democracy. They’re preparing for war, though, and know that force will most likely have to be used.

The characters are well developed, especially Jackson and his family. It’s interesting how some of the characters change from Jackson’s point of view throughout time.

I definitely recommend this trilogy. It’s worth getting through the explanations of the first book to get to the rest of the trilogy.

Perhaps you wouldn’t characterize the Finance Manager of your local automobile dealership as an Amazon best-selling author—until you get to know T.T. Michael. He has worked for the past decade at a Toyota Dealership in Illinois, but he is in the driver’s seat as the writer of, Fire War, a political thriller set in the year 2076. See what happens when the United States, Canada, and Mexico all join forces to make one super country. See more about him and his book Fire War at www.ttmichael.com

The Amazon purchase links in this post are affiliate links. Purchasing through them helps sustain Bound 4 Escape.