​Some of the most powerful people in the world want to kill Michael Nicholas. Only his brother Alex can save him—the problem is that Alex is dead.

It’s been almost a year since Alex Nicholas, a Queens-based underworld boss, was gunned down. After Alex’s brutal murder, Michael inherited not only his brother’s business, but his enemies. Michael is now a key player in a world he once feared. By day, he is the head of a Fortune 500 company. By night, the CEO of Tartarus, one of the world’s largest illegal gambling operations.

Before his death, Alex invested heavily in breakthrough artificial intelligence software so that he could live forever. It worked. In his virtual form, Alex can communicate with Michael and monitor information—and people—in ways the NSA would envy.

It is Alex who discovers Michael’s life is in danger. He detects plots that reach from the darkest corners of Queens to the highest officials in the Vatican—and they all want Michael dead.

Michael is now in a race to save his life, but he is never alone. Alex is there to help him navigate through this maze of life and death. Also protecting Michael from the forces closing in around him is Sindy Steele, a beautiful and lethal bodyguard.

How far is Michael willing to go to save his own life and that of his family? Guided only by a familiar face on a computer screen, will the information Alex discovers allow Michael to go from being the hunted to the hunter?

Michael Nicholas had a normal quiet life only a year ago until his brother, a bookie, was gunned down. Michael continued to work as a CEO in the corporate world but also took over his brother’s business and has done surprisingly well. In fact, he’s done so well that some people think his brother, Alex, is still alive. Alex isn’t alive, or is he? He had an AI duplicate made of himself before he died and his AI self seems to have developed to be smarter and better than the original Alex.

Michael is not as moral as he once thought he was. In fact, I don’t like his character much as a person. He doesn’t seem to think anything about people who are “in his way” dying. He often thinks it’s just coincidence but at one point I’m pretty sure he said he didn’t believe in coincidence, maybe in book one. He’s also taken on a mistress which he never would have done before his brother’s death.

There are so many things going on in Death Logs In it’s not a quick read. You have to pay attention to what’s going on, who wants whom dead, who is an ally and who is an enemy (or are they?). It was difficult to put this book down.  I do suggest an edit. There were quite a few missing quotation marks which made it difficult sometimes to know when someone was talking or had finished talking and I had to reread those paragraphs.

I definitely recommend Death Logs In. This is the second book in the series but it does have enough back story that it can stand on its own.  I like the way it ended but I’m curious what will happen with Michael and Alex next. 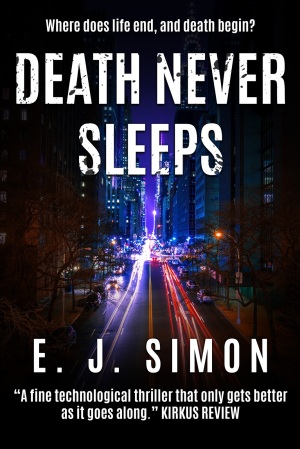 Where does life end, and death begin?

Brothers, Alex and Michael, weren’t particularly close in terms of their careers in their later years. But when Alex is murdered, Michael finds it necessary to keep Alex’s business running, at least for the foreseeable future.

With very little knowledge about what Alex actually did for a living, little does he envisage the level of complication this entails. Working closely with his cousins, Fat and Skinny Lester, Michael starts to get a sense of what needs doing … in whatever way Alex would have dealt with things.

But, when Alex’s current wife, and his two ex-wives, surface and start to dish out demands, Michael finds himself going deeper and deeper into Alex’s personal space. All his ex-wives knew there was money left hidden … but only Alex knew of its exact location.

When Russell, an old friend of Michael’s, and Alex’s most trusted person, offers to help Michael find the money, Michael feels he can start closing up on Alex’s loose ends and move on with his own, increasingly complicated life.

Until … Russell is brutally murdered …

Someone else is after Alex’s money … and it’s not a friendly person.

But is Alex really dead? Or is he as dead as he has prepared himself to be?

Michael is beyond confused … is he imaging the conversations he’s having with Alex? But Alex was shot dead in his own restaurant, one filled with policemen. Surely, Alex is dead?

Whichever way Michael tries to rationalize things in his head, Alex’s support is beyond what he needs. Finding himself face to face with a crook, Sharkey, one who has no qualms about killing people, one Alex was in debt to, Michael takes on Alex’s advice … dead or not!

As the number of deaths rise, Michael and his wife, Samantha, are left on their toes. Would they ever feel safe again? Is anyone safe? And how far did Alex go with his new venture?

Alex, a bookie, is gunned down while on the phone with his brother, Michael. Michael is the CEO of a big company and ends up having to take over his brother’s business for a while in order to get things taken care of, such as safety of the family and paying a big debt to a mobster. After a murder of a close friend of Alex’s, it looks like no one is safe and Micheal feels the need to find the murderer.

As if all of that isn’t enough, Michael keeps getting messages from Alex. How is that possible? And other mysterious things take place such as the police being notified that Michael and his wife need help, but the message didn’t come through 911. What is happening?

Death Never Sleeps is an exciting page-turner in which Michael Nicholas finds out that he can do more than he ever knew if he puts his mind to it. The idea of AI isn’t new but the way it’s presented here is new to me and quite interesting. The only thing I was disappointed in is the way the book ended. There are still a lot of things left unanswered. Luckily, I have the next book in the series to read soon.